To arouse vivid emotions of corporate event participants? It`s easy, if you have a wizard`s hat!

“Let`s draw something beautiful, pleasant and good!” – the morning of January 30 started for business travel experts of the ABT-ACTE Russia Impressions Academy from coloured pencils and crayons (and yours?) in Moscow Izmailovo-Vega congress centre. Sponsors of the event were AZIMUT Hotel Smolenskaya Moscow, angelo by Vienna House Ekaterinburg, Eventicious mobile application and Aromaobraz perfume studio.

“The fact is, that the moment the event participant crosses the threshold of a hotel, he already experiences some emotions!”, Sergey Armishev, general director of Special Project Agency started his speech. “And what these emotions will be like depends on you, the organizer! In order to create the necessary mood, professional event planners use the colour palette. They know that the extent, to which the colour influences emotions, is great”. 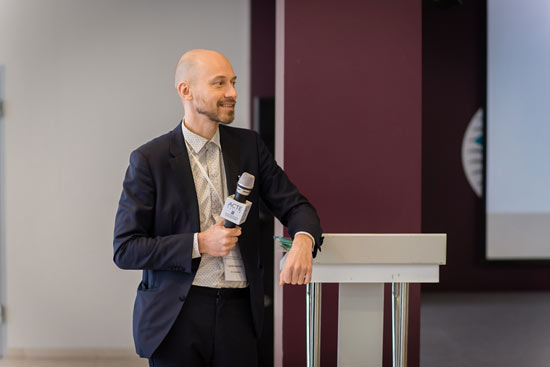 The expert gave some background information on the colours. Thus, red is an exciting, warming, energetic colour. Moreover, it may even activate body functions. The orange colour tonifies, improves digestion, facilitates rejuvenation, liberation. Yellow is the least tiring, improves eyesight and the nervous system. Green has a freshening and at the same time a calming effect, lowers blood pressure. Light blue refreshes, eases muscle tonus, regulates heartbeat. However, you should be very accurate with dark blue – this colour may drive you into depression. And purple, which is very popular nowadays, has an oppressing effect on the nervous system.

In order to provoke really strong, positive emotions, event organizers should understand, what the participants themselves expect of these emotions. In this case the event is definitely going to be a success. This was the topic chosen by Mikhail Moskalyov, a candidate of economic sciences, a practicing psychologist-consultant, a trainer, a facilitator and a certified IIOSS practician. In his experiment he has asked all the participants to share their vision and associations of bright impressions — and to choose a piece of paper of a certain color for their short description.

“And now there will be some magic”, the expert promised. “We will create our impressions map. So, what are they for you? Memoirs, inspiration, surprise, moments, history, uniqueness, “sun, sea, beach”, rides, new destinations. As well as new acquaintances, anticipation, joy, love, new knowledge, happiness, new feelings”.

The speaker also drew the attention of the audience to the fact that the impressions map turned out to be multicoloured! Which meant that the participants` impressions could be caused by both active and calm emotions. 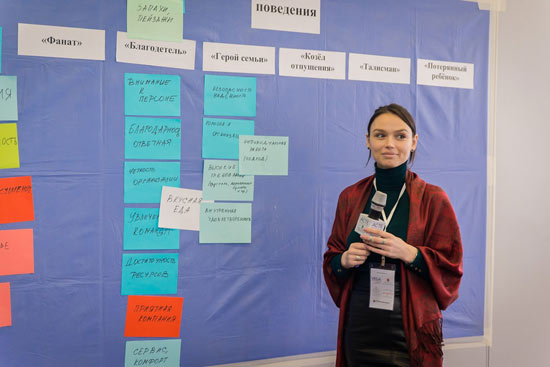 “You can use such methods to gradually open floor to psychologically pressing issues you need to discuss during the event”, Mikhail explained. “If you know what your partner`s positive impressions are associated with, you will reach the best effect”.

On guard of emotions

But emotions aren't infinite, and it is dangerous to forget about it. Moreover, emotional burnout of event organizers occurs as quickly, as that of those who are engaged in, for example, volunteering. What is the right way not to burn yourself out at work and not to lose interest in what you are doing? Svetlana Velichko, a coach and an author of publications on “Snob” website gave the answer to this question.

Emotional burnout is a process of a gradual loss of cognitive energy, which results in emotional and physical fatigue. The person becomes distracted in such a state. “When my clients answered the question “How do you understand that you have an emotional burnout?", many of them said they felt apathetic, they did not want anything, but the problem is that it is the last stage already. The emotional burnout is a very long process”, Svetlana stressed.

At the first stage it seems to you that everything is as it should be. The only disturbing symptom is the persisting desire to assert yourself, an obsession. It is your full submission to one certain thing, in particular – to your work. “When we are invited to the company of our dream, we feel enthusiastic, and therefore are ready to do our utmost. We feel euphoria!”, and this is already the moment you should give some thought to, Svetlana is convinced.

At the second stage you have to interest yourself: mail, calls, projects, colleagues` questions — and here you start thinking that it is much easier to do everything yourself. “Then there comes the moment, when you have no urgent tasks to do, but you check your e-mails all the same”, the expert warned.

By the way, about electronic mail. Several surveys have shown that constant communication by e-mail leads to a decrease in your IQ — on average by 10%. Slightly less for women, slightly more for men.

Then you start pinballing between work and home, eat whatever turns up, without feeling the taste of food, you reduce your sleep, forget about the gym, communicate with colleagues only on business: “Why should I waste my time on it?”. There is a lot of work, the irritation increases. And when you come home, you want to be left alone for some time, you are not ready to communicate right away. Your family`s requests are perceived as a series of tasks: they should be solved as quickly as possible. “We often come to the conclusion that emotions seem to interfere with our perception of the world, but in fact they define our needs. By suppressing them, we suppress our desires. And there is less trust to people who suppress their emotions”, Svetlana warned the audience. 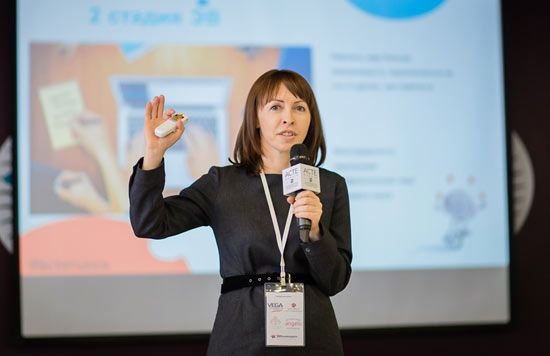 At the next stage fatigue accrues, it is difficult to keep concentration, you feel sleepy. You are afraid of making a mistake and feel you are losing control. At this stage the level of adrenaline becomes critical. Anxiety grows into panic. The employee works even more, because he is afraid of not meeting expectations and losing his status.

At the sixth stage of emotional burnout it becomes difficult to get into gear. Everything loses its sense — the employee doesn't feel that his efforts are appreciated by the company. You are exhausted, colleagues irritate you, lunch is a challenge, and a corporate party — it should be avoided by all means.

Some scientists distinguish even more stages of an emotional burnout, the speaker added, but anyway everything ends with a visit to the doctor.

“What can you do? Appreciate the small achievements you make every day”, the speaker advised. “It gives you the drive, and you can move further. Also try doing difficult tasks in the first half of the day when you are fresh and active, and do routine tasks in the second half of the day”.

A hobby may also help you to cope with an emotional burnout. Svetlana brought an example of her personal situation: when she was a child, she wanted to learn to skate very much. When she remembered about her dream, she started training. The lessons helped her to switch to something new, to concentrate on the pleasant and to get rid of unnecessary thoughts.

“You may also try toning down your emotions, but not to block them inside yourself”, the expert continued. “MRT has shown that when we speak out on our feelings, their intensity decreases”. It`s a real trick! So, if you say: “I am angry with you”, the grade of the negative emotion will decrease.

It is necessary to communicate with your relatives and family — it is easier to overcome a stress this way. “Why? Because we let ourselves feel unprotected when we are with our friends and relatives. And the more we are loved and accepted, the quicker and easier we adapt to the circumstances”, Svetlana explained.

Emotional intellect may help us to resist a burnout. In other words, the acceptance of our emotions. By accepting our emotions, we learn to accept other people`s emotions. “And get enough sleep! In general, the lack of sleep is very bad for health. It is important to sleep at least six hours a day”, the coach stressed.

And the company should develop the culture of trust. The employee shouldn't be afraid of telling his boss that he may come apart in case his job duties increase. Companies shouldn't also forget to recognize their employees` achievements. It may be helpful to start dancing classes or a yoga course in the office, to invite a coach psychologist.

There you have it

After the coffee break the participants were engaged in developing a concept of corporate events for February 14, February 23 and March 8. But before this, they were offered to try 20 aromas and to choose five of them, the most inspiring. The aromas were chosen by vote. Veronika Brukhovetskaya, the founder of “Aromaobraz” perfume studio, used them to prepare an aroma that could inspire super creative ideas. It included notes of a tulip, a passion fruit, a black currant, a clementine. 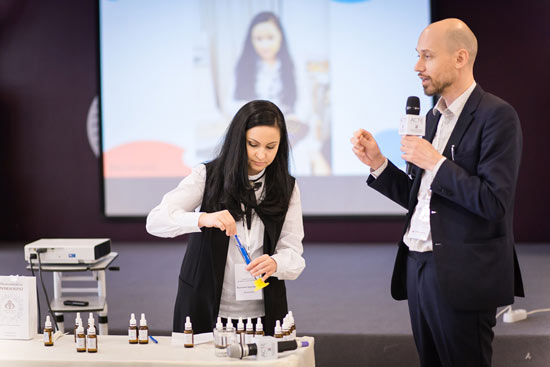 The most creative videos by world brands became the next source of inspiration for the audience of the Academy. “When we try to understand the idea of the director, who is a product manager, we see that they pursued only one aim — to influence the final customer`s feelings through images”, Sergey Armishev noted. “What else do all these videos have in common? Emotions, the emphasis on feelings and relationship, humour, frequent change of shots, an unexpected scenario. And the product is presented in the end, but in a very unexpected way, inconspicuously".

Sergey suggested using the same principles when creating the concept of each of the three events: “The task is to make the guests feel satisfied. To make them have fun. The participants should feel that the event has been planned with love and only for them”.

The expert suggested dividing into teams and having a brainstorm: “We will express any ideas, without any budget limits. Look beyond. It will help us to find something unusual, creative, cool and modern”.

Sergey recommended using the “tomatoes” working method that was popular in Italy in the 80s. You have a certain amount of time for discussion: one member of the group writes down the ideas, and the others are “in thoughts and dreams”. After this, the ideas are evaluated.

“We reject the first idea – as a rule, it is something you have already come across somewhere some time before. The second one is likely to come from what you have already seen on TV or read about. And only the third idea may probably be the gold grain”, the speaker said.

Sergey also stressed the importance of role division in the group that is responsible for event planning. Here you could use the theory of “six hats”.

The white hat is the facts. For example, you have only 50 thousand rubles for your event. The black hat is estimation and caution. This person will foresee all kinds of force majeure. The yellow hat is the logic. The person with this hat ensures that all processes are logical and consecutive. The green hat is imagination, the creative idea of the event. The blue hat is control. Everything should meet the regulations of the company, the principles of respect and tolerance. And the last one which is left, is the wizard`s hat, or Gryffindor`s hat — the one who wears it creates magic, generates the breakthrough idea, which, despite control (the blue hat), still has the right to exist.

After the teams presented their creative concepts, Sergey reminded everyone of the success of the well-known four-person band, The Beatles: “What is the secret of success of this musical band? The main thing is that its participants wrote songs about the people they knew. Their songs were inspired by simple human relations. It is so nice to sing for a certain person, and not for someone abstract!”

The musicians put the emotions they felt in childhood into their songs, the impressions of the places they visited. It is for people and about people, simple and easy to understand. “Keep in mind, that bright emotions do not always give the WOW effect!”, Sergey concluded. “I also hope that you will get back to your work today full of inspiration and energy!"