ABT-ACTE Russia conference in Rostov-on-Don: “Are you ready to launch a hotel program? Just do it!”

“In Rostov there are so many lights, you can meet acquaintances and friends!”, this phrase by poet Konstantin Undrov describes impressions of the participants of ABT-ACTE Russia educational session that was held in the southern capital of Russia for the first time. The delegates started establishing business contacts on the eve of the event during the excursion to the new Rostov airport Platov that is to open on December 1st.

The design of the air terminal building called “A Bridge to the Sky” was developed by the London company TwelveArchitects. Curved lineaments of the roof, as envisioned by the architects, symbolize the waves of the River Don that come to the bank. The airport has been named after the Headman of the Don Cossack Army Matvey Platov. The airport capacity is expected to amount to approximately five million passengers per year. “We have examined all the facilities of the new air hub, got acquainted with the history of its construction, visited terminals, lounges, rest areas”, assistant director of Farmacevt CJSC Olga Kochur shared her impressions. 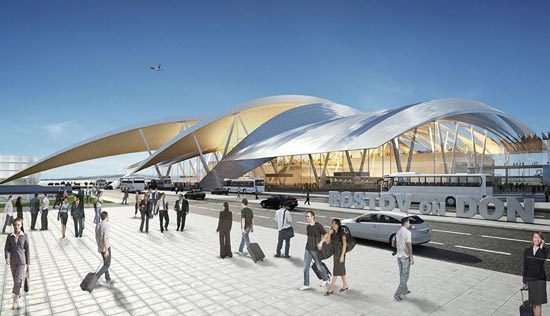 On September 28, an intensive educational program started in Hermitage Hotel. It was opened by key account director of ABT-ACTE Russia Irina Mikhalkova. In her words, in some Russian companies business travel and corporate events were still not subject to any regulations, but 81% of companies had already worked out and introduced a travel policy. Julia Garkavenko, senior expert of the administrative department of EY (Rostov-on-Don office) spoke about the key points of its development.

“Do you know that business travel is the second cost item after staff remuneration for the majority of companies?” the expert asked. “They bypass even IT investment!” However, the Labour Code of Russia does not set any limits for business trip compensations – in lawmakers` opinion, these questions should be settled by local regulations, i.e. by the travel policy.

In her words, the trip provision should be a management tool and a part of an educational program for new employees. “This document stipulates rules of cooperation with travel service providers, the responsibility is divided between the company, the traveller and the organizer, the level of the traveller`s safety is increased”, Ms Garkavenko added.

As a rule, the result of travel policy introduction is process optimization: the efficiency of resource allocation in the corporation and management accounting is increased, business trip planning requires minimum time, costs are reduced, the expert pointed out.

By the way, a company can achieve economy, among other things, by concluding corporate agreements with air carriers. This was the topic the panel discussion of the conference was devoted to. Discussion participants were senior corporate department manager of S7 Airlines Vitaly Pushkin, regional representative of Air France/KLM Natalia Smirnova and senior corporate department expert of PAO Aeroflot Sergey Rastorguev.

Aviation industry experts answered many questions, including unusual ones. The discussion was devoted not only to the agreements that were the most beneficial for air carriers, the provisions that corporate customers wanted to have in these documents and the question who should initiate the conclusion of such an agreement. Thus, one of the questions to the experts was whether you could pay for the airline`s services with bitcoins. The audience was most interested in the issues of fare setting on the most demanded destinations in the region.

Besides, airline representatives told the participants about the services far not all the passengers know about. Have you come to the wrong airport of departure? Not a problem at all. S7 Airlines offers rapid transfer between airports – by air! You have a connection in Amsterdam, but you are afraid of getting lost in the airport because you don`t know the language? The customers, who work with KLM directly, are offered free forwarding by the airline.

The second session of the conference was devoted to cooperation with service providers. Irina Kostyukova, head of travel purchase group of Kaspersky Lab shared her experience in development and introduction of a hotel program in her company. In her words, to start with, travel managers have to collect data on the number of nights and the average length of stay of business travellers in hotels, to work out object selection criteria (financial terms, location, facilities, booking and payment methods, cancellation rules), to determine the selection process (RFP, talks, a tender, an auction).

But even if the stage of preparation was irreproachable, expectations of the program do no always meet the reality, the expert warned. “For example, the corporate accommodation rate is available far not always. If the agreement does not include LRA and/or includes blackouts, the business traveller will not have his special rate confirmed on a regular basis. And you have to be ready to explain it to the travellers”, Irina said.

The axiom “The more the nights, the lower the rate” is also true to a certain extent. “The hotel is not interested in giving all his rooms to one customer at the minimum rate, even if this customer is ready to purchase a huge amount of nights”, the speaker explained. “Besides, far not always one hotel is better than several ones: if there are several hundred nights, it is better not to put all the eggs in one basket. It promotes competition between providers".

The expert also pointed out that the rule “When the agent`s or the public rate is lower than the corporate one, you can book it and save even more” really works. But there is one nuance in this case: the hotel will not count these nights as yours, and they will not be included into the target. You win the battle, but not the war. It is better to decide from the start whether you act like this or not. Besides, rate availability should always be monitored!” Irina said. She finished her speech with the slogan of the famous sports company, Nike: “Ready? Then just do it!”

The topic of the third session was MICE. General Director of Special Project Agency Sergey Armishev suggested his colleagues had a new look on event planning. In his words, interesting trends have appeared in the MICE industry for the past few years. And many of them are connected with Internet and the technological advance – and event planners have experienced the power of Facebook and Twitter first-hand! “Due to social media event participants can arrange preliminary meetings, as well as stay in touch after the event. By the word, the audience is not passive any more: instead of a monologue of an external expert, there is a dialogue, an educational session”, Sergey says. “Quadcopters, live broadcasts, virtual presence – you can use all this not only to achieve the wow-effect and provide a huge amount of positive emotions and adrenaline to the participants, but to cut costs as well!”

The expert also noted that everyone was usually willing to take part in unique events, be inspired. This is why various green initiatives, relax practices, as well as all kinds of “local things” – food, culture, traditions – are getting more and more popular.

By the way, events of similar formats are numerous in Rostov-on-Don and its region. Natalia Aleksandrova, head of MICE department of Reina-Tour Lufthansa City Center spoke about latent facilities of the region. “Our region provides versatile options of corporate events: cooking and intellectual contests, retro train tours, harvest festivals”, Natalia explained. “For example, the “Questoria” game includes investigation! You will have to gather evidence, find out, identify the criminal. The outcome is not known beforehand and totally depends on the players. You and your colleagues will forget all about work and get to know each other better!”.