Baltiya hotel in Saint Petersburg hosted its first guests last spring. Since then it has successfully completed optional certification, confirmed its three star category, won the contests: the Hospitable Saint Petersburg, the Bronevik Star, the Best Russian Hotels and was certified as a business hotel by the Russian Association of Business Travel in August 2013. And all these achievements have taken only 1.5 years!

Interestingly, Baltiya belongs to middle segment hotels, that are rather numerous in Saint Petersburg. So we can assert that success like that is twice as remarkable. Baltiya general director Nikolay Nagach has told the Russian Association of Business Travel about the nuances of the hotel’s policy which obviously allow it to develop so rapidly. 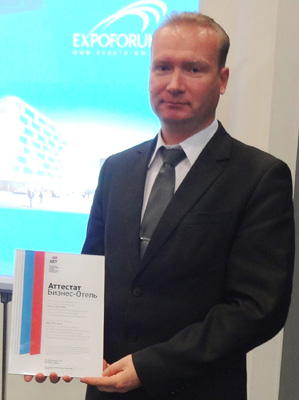 — Nikolay, how long have you been working in this business? What did you start from?

— Next year it will be 20 years since I have come to the hotel industry. At first, when I was a student of the Moscow Institute of Electronics and Mathematics I worked as a night auditor in Novotel Sheremetievo-2. It was then that I first learned about service standards. In spring 1998 I occupied the same position in Hotel Metropol Moscow. A little bit later because of the August crisis I had to look for another job. As the result I was invited to Holiday Inn Vinogradovo. It was the first and the only hotel in Russia at the moment that was run under the Holiday Inn brand.

For less than ten years of my work there I had to deal with a wide range of questions connected with accommodation, guest service, event arrangement, hotel operation. In 2000 I was appointed deputy reception service director and in 2003 its director. I worked on this position till 2008. My professional growth continued in Izhevsk where I was appointed general manager of the Park Inn hotel and in 2009 I was invited to take charge of operations department of the Ibis hotel in Kazan, which opened in August that year. I should note that I was lucky to participate in the preparation to the opening of the two abovementioned hotels. This experience came in very useful during the construction, equipment and the launch of Baltiya. 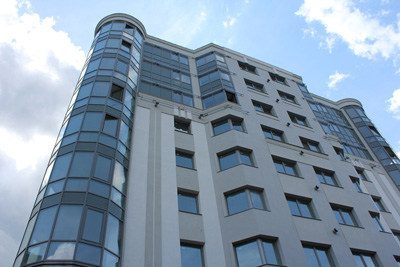 — Saint Petersburg is considered to be the second city after Moscow popular with business travellers. Are there any differences in their requirements to business hotels?

— In my point of view, Saint Petersburg holds the second place of business travel volumes only due to the number of its population and the traffic volume: there are only 5 railway stations and Pulkovo airport compared to the corresponding nine and three transport hubs in Moscow. Business travellers` expectations are approximately the same: comfortable rooms, a good breakfast, a safe stay and minimum travel time from the hotel to their destinations. So I think these two cities are comparable in terms of the range of services provided and their service levels. There are, of course business travellers, who come to seminars and conferences, and whose schedule includes visiting places of interest, but more numerous are guests who leave on business in the morning and come back in the evening and show no interest in the cultural life of the Northern capital, because they are physically and emotionally tired. 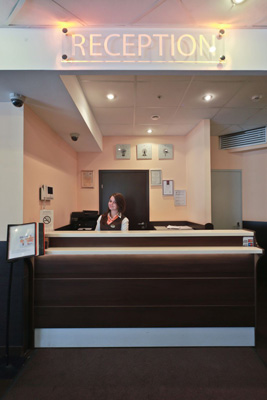 It is no secret, that one of the factors affecting the choice of an accommodation facility is the hotel’s location, but you have to keep in mind that companies have their travel budgets, rules and travel policies, as well as historic preferences. It is difficult to say which of these factors are more important for whom, but it is obvious, that top managers of international companies are prisoners of their status — they stay in five star hotels and go by cars, so it is extremely important for them to plan their schedule with regard to the city’s heavy traffic. Directors and the staff of small companies, in their turn use metro and public transport and usually get from the centre to the airport within an hour. The traffic in Saint Petersburg has become much worse, but it is still far from that of Moscow!

— How can you assess today’s segment of three star hotels in Saint Petersburg? Is competition high?

— I can say with delicate irony, that the three star hotel segment is rather large. Both hotel capacities and their equipment and services provided differ a lot. About 250 hotels that claim to be three star hotels are registered in online booking systems. I can not say how many of them really meet the standards of this category, because it is the task of the state classification system to assess their star rating.

Competition in our price category, which is  thousand roubles per night is very high. It is especially evident in the periods of low demand, because part of our clients is attracted by a price decrease offered by hotels of a higher category. Those who say that Saint Petersburg lacks hotels forget to add «in June». Starting from January 2012 I have been studying hotel offers in Saint Petersburg for the current month and for three months ahead. The supply is limited in June only, in other months more than 500 accommodation facilities of various price categories offer travellers their services.

As for the competition in the area where Baltiya is situated, the southern part of Vyborgsky district and the Petrograd side, there are 10 two to four star hotels with capacities from 30 to 400 rooms here. You can make a judgement about competition yourself...

— Is there a chance to sidestep your competitors due to your rates?

— Judging by this year I can say that Baltiya offers moderate and economically feasible room rates. From the beginning of the year the average room rate in our area has fluctuated from 2500 roubles in January to 5300 roubles in June. The most generous offer was after the New Year holidays, of course: 1900 roubles per night, including VAT and breakfast. The highest rate at the moment was 3500 roubles. In June only one hotel was not fully booked and offered rooms for 5300 roubles per night.

Of course, guests would like prices to be lower, rooms to be bigger and breakfast to be like in Turkish or Egyptian resorts. Unfortunately, energy tariffs and food prices grow, so we can not prevent a rise in room rates. Baltiya’s rack rates are a little bit higher than the average rate in our competitive environment. But we always have special offers or advantageous rates for corporate clients or our frequent guests. Baltiya’s open prices are an evident competitive advantage.

— Does Baltiya have frequent corporate buyers? What is their share in total sales, say, annual revenue? What to you do to attract them? 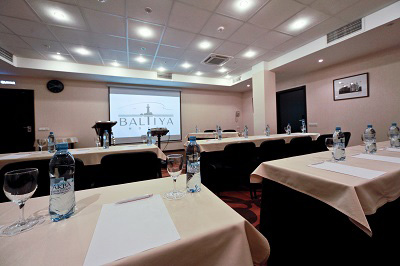 — The vast majority of our guests are Russian citizens. The result is quite predictable, as the first steps in promoting our services were made on the domestic market. And the hotel’s popularity has grown with time: regular advertisement, presence in the Internet and booking systems, participation in various contests have had their effect. Buzz marketing has played an important role: our guests more and more often answer the question «Where did you learn about our hotel?» as «from colleagues or friends».

We have established partner relations with a number of companies for more than a year of our work. In the first turn it refers to accommodation services, catering, business events. For the past 10 months of this year the ratio of business travellers has surpassed 30%, and there is a slight increase compared to the last year. Of course, we plan to develop this focus area further.

Besides, we have worked out a progressive discount system for frequent guests, discount cards for the restaurant and the bar and offer employees of our partner companies special prices for their individual stay during the low season.

— How long have you had Wi-Fi on the hotel territory? Do you think it is important for business travellers?

— We have offered our guests free Internet on the whole hotel territory from the moment we opened. It was our principled position at the stage of extra services planning. Guests wish to keep in touch 24 hours a day. We have taken it into account and offered our guests notepads for a short period of time absolutely free of charge.

— In the age of Internet and mobile technologies the company’s reputation may be seriously affected by comments in forums and social networks. Do you usually monitor such reviews? Do you ask your clients to fill in questionnaires in order to improve your services?

— We are very responsible when working with our guests’ reviews, because we understand the necessity of useful criticism. It is our guests that we work for, so we are interested in receiving clear guides from them. I check the corresponding sections in booking systems on a regular basis, usually every two weeks or more often, study the page on our site, guests’ comments and opinions in their questionnaires. I always give answers to all comments with a legible back address. Unfortunately, not all demands and requests can be fulfilled due to technical and architectural aspects, but repair of shower cabins, partial replacement of TVs and the increase of breakfast menu are quite realizable. 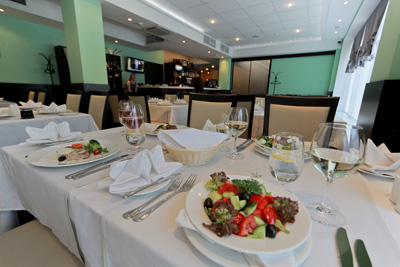 By the way, due to our guests’ reviews on Tripadvisor.ru we hold the place among 243 Saint Petersburg hotels, and we have the grade «very good» on Booking.com, which is 8,5 points out of 10!

— What is your opinion about the hotel’s ecological policy? There are business hotels in Russia that implement it successfully.

— We do take regular steps aimed at decreasing the negative impact of our work on the environment: we have concluded agreements to have grease traps cleaned and luminous lamps utilized, we carry out waste water analysis every two weeks, have a scheduled program of replacement of incandescent lamps with energy saving ones. We also have cardboard recycled and try to use less paper, having digitalized our document flow.

As for smoking, there is room zoning in the hotel, high-level ventilation, modern cleaning agents and air fresheners.

— Was it difficult to complete the Business and Conference Hotel Attestation Program? What do you expect from this cooperation?

— I can not say that attestation was a hard task for us, because we took into account all the necessary requirements of the state classification system and of the Russian Association of Business Travel at the stage of hotel construction and room equipment. And we were getting ready for inspections even before we opened! So the result was quite predictable: in September 2012 we received the certificate of a three star hotel, and in August 2013 — the certificate of a business hotel of the Association.

Small private hotels find it vitally important and at the same time overwhelmingly expensive to promote their services and their brand on their own. Baltiya alone can not compete with the representatives of international hotel chains, who have several decades’ experience in development and marketing and a large client base. So our integration into the business community including not only Russian, but also foreign partners can be called a strategic step on the way of economic growth of a certain hotel. I am sure, that cooperation with ABT will help us make Baltiya’s trade mark more recognizable on the international market. 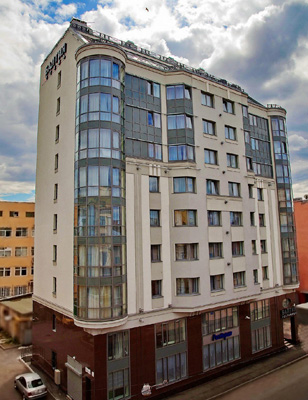