"They say that predicting the future is a thankless task, but I was asked to be a magician today and to tell everyone what awaits the Russian business travel industry in 2018", Andrey Voronin, executive director of ATH American Express GBT opened ABT-ACTE Russia session "Year`s results". "By a fortunate coincidence we made a large forecast for 20 years ahead six years ago. And you know, it has been coming true so far!". The event was held in Swissotel Krasnye Holmy on December 12. For this occasion, Andrey turned into a real magician wearing a magic hat and a mantle! 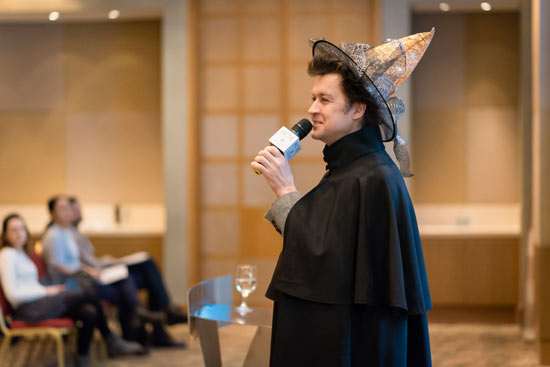 As far back as in 2011 ATH American Express GBT experts determined the main three development trends of the Russian business travel market. The first was the reduction of the number of TMCs in the market. "At that moment we supposed that one company per year on average would leave game as the result of a merger, an acquisition or a bankruptcy", Andrey said. "The process started rather slowly, but in 2017 it sped up considerably: Vipservice, CWT and MaxiMICE, ATH American Express GBT, BTM and Talarii announced their merger. In 2011 there were 16 large players in Russia, and by 2022 their number will fall to 5. "In my opinion this trend is positive, because consolidation lets companies invest more funds into service and technology development, move forward", the speaker pointed out.

The second trend is market growth. "This is what we have not guessed exactly", Andrey admits. "Nobody could hardly say at that time what the Russian economy was in for. And there was no real growth, in fact. If we transfer the turnover into dollars, we can speak even of a slight decrease".

Another key trend ATH American Express GBT experts paid their attention to was the shift from non-managed travel to managed one. "According to our forecast, by 2022 the ratio of managed/unmanaged travel will be 40% to 60%. Many large Russian holdings used to work anywhere and with any provider, but now have consolidated all their travel in one TMC. For example, Sberbank is one of them”.

The expert also pointed out the active use of online services and the issue of open fares. “About 80% of companies have already introduced OBTs or are thinking of its implementation. As for the fares, I advise our customers to check where the ticket comes from. If it comes directly from the booking system, hidden commission fees are impossible there, if it comes from a TMC - there is such a possibility", Andrey said.

"The most positive thing of all that is going on, is the fact that the customers are beginning to understand what they want", executive director of ATH American Express GBT stressed. "Customers used to be difficult to deal with, because they did not have a clear understanding of what was important and necessary for them. The professional skills of travel managers grow every year. And market consolidation lets the leading market players invest more into development, compete in a more transparent way, provide mutually beneficial solutions to their customers".